The Everything of Theory

That's not really what this paper is about, but we needed to pad out the abstract, since nowadays abstracts are longer than most introductions. That's because nobody reads papers anymore (unless someone tells them to). Unfortunately, we can't fit anything interesting into the Abstract, because arXiv.org refuses to let us include sound effects, movies, and odors.

In this paper we actually explain the title, authors, institution, and abstract. Next comes some propaganda about how exciting and wonderful some recent developments are. Then we ramble on about some other things bothering us, like why our papers don't get cited more often. (Hey, you know how to use URL's, don't you?) Then there's some physics in there somewhere. Finally, we conclude with an Appendix, Glossary, and References, since that's all that people read anyway (assuming they stayed awake through this Abstract).

Hi. Nice to meet you. Our names are V. Gates, M. Roachcock, E. Kangaroo, and W.C. Gall. How do you like this weather we've been having? Wasn't that a great game last night? No, and we didn't vote for him, either. Well, maybe they'll increase funding next year. Yes, our doctor told us the same thing. That's the court system for you! Ha, ha, yes, we have heard that one, but it's funny every time we hear it. It's down the hall and around the corner.

Well, nice talking to you. Hope to see you again sometime. We'd like to stay and chat some more, but we have a paper to write. Bye for now. 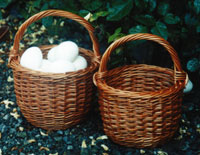 This is not string theory's fault; high energy physics now takes a lot more energy than most people have. The real problem with string theory is that there is no alternative. However, the reason there is no alternative is that no one ever bothers to look for one; in fact, there is a strong resistance to even considering looking for one. Consequently, practically all theoretical high energy physics (and even most of phenomenology) is now string theory. Thus, string theory is not so much the Theory of Everything (since it explains nothing), but rather the "Everything of Theory", since it now encompasses all of theory. This era in string research is strongly reminiscent of the Dutch tulip trade just before the Tulip Crash of 1637.

The main reason string theory is incapable of explaining anything is that it has no predictive power. But even if it could predict anything, it would be only at the Planck scale, which is way beyond experiment of the foreseeable future. As a result, string theory has become boring. One solution might be to work on something that has more to do with observable energies. (E.g., some have proposed that the effective Planck scale might be at much larger distances, say, a micron. This would allow for accessible experimental predictions, such as gravitational collapse of microbes.)

We propose here a different alternative: Apply string theory to energies beyond the Planck scale, which are not observable even in principle. Then one avoids the objection of the untimeliness of string theory, since it never will be relevant, and thus one may as well work on it now as later.

It is now known for certain that both Taipei & Type B(eijing) superstrings are dual to M theory. However, we still do not have the slightest idea what M theory is.

In fact, the most active research in the area is trying to understand what the "M" stands for. Originally it was thought to stand for "Membrane", but soon it was realized that the Membrane cannot be quantized, so that possibility was rejected. Another possibility was "Matrix", but then it was remembered that Matrix theory works only in D≤2. Finally, it was decided that "M" stands for "Mother", and so far no one has dared to disobey. ("F" theory was briefly considered also, but clearly strings form a matriarchical society.)

Calculations in M theory require making Lorentz boots to the infinite momentum frame. Of course, Lorentz invariance means physics is the same in all frames, but at this speed we are too dizzy to reject hand-waving arguments [we got tired of renumbering references, so guess].

Various methods have been used in an attempt to apply stringbrane theory to f(enomenol)udgy. One recent approach is compactification on AdS5⊗S5. (According to the Einstein summation convention, sum over 5=0,1,2,3,4). This produces supersymmetric QCD on a pročektive superspace. The results for masses of glueball states totally agree with results from lattice QCD, thus obtaining confirmation of both theories without recourse to experiment.

The details of the calculations have been (/are being/will be) presented elsewhere; here we give cartoons. Since lattice QCD works in Euclidean space, we Wick rotate

The usual OscarWilder-Schraeder conditions are then applied to preserve seepy tea invariance. Holography then follows from the mysterious relation

The continuum limit is ambiguous, as always, but we assume all variations of the theory are members of the same Univers(al)ity class. In any case, we hide such ambiguities by use of the subtle-point approximation. Curvature is flattened by coupling it to the Frankensteinlin term, which scares away the ghost current.

Another advantage of branes is that the extra ones can account for the duck matter needed to explain the missing mass, as well as the duck tape (cosmic strings) that hold the compactified dimensions together. Of course, to account for the recent discovery of the nonvanishing cosmological constant, one needs the usual fine tuning to order yottayottayotta=1072.

Recent cosmological observations have indicated that α=e2/ħc varies with time. The obvious interpretation is that 2 is not a constant. This may be related to the classical limit
[q,p] = iħ → 0     in   lim i → 0
One theoretical justification is extra dimensions: It is known that gauge couplings are dimensionless only in D=4. However, experimentally they are seen to have logarithmic corrections in terms of energy (and thus time), indicating nonvanishing dimension: In D dimensions, gauge couplings have energy dependence
α∼ ED-4

and thus in fractal dimension D=4-ε we have roughly

(in the case of asymptotic freedom). Thus, the Standard Model is dual to a model in 4-ε dimensions, where the quantum running of the coupling in the Standard Model appears already classically in the latter model. Note that ε itself does not run, since

Of course, we introduce nonabelian fields for gluons because we want to gauge their reaction.

Similarly, in this new model there are "ε-scalars" that can take the place of Higgs fields, just as in monopole solutions of pure Yang-Mills theory, where the time component of the 4-vector potential acts as an adjoint Higgs. Since there are only ε of these Higgs's, the probability of their production is correspondingly reduced, explaining the Higgs's's apparent experimental absence.

This model is similar to the usual braneworld scenarios, with 2 important differences:

That's it. It's the end. We have to stop now. You can stay and read the Appendices if you want. Thanks for coming. Don't forget your coats. Have a κν year!

Appendix: How to get a job in physics

I. Be born a genius

If you are born absolutely brilliant, then everyone will want you. This will require some advanced planning, starting before birth, and maybe before conception. However, few people plan their careers till high school, which is 15 years too late. Unfortunately, it's not clear that matchmaking or even genetic engineering will accomplish this goal: How many of Einstein's relatives won Nobel prizes?

If you go to an "in" university, you can get letters of recommendation from an "in" professor, and maybe even get one as an advisor. Of course, just because the university is "in" when you enter grad school doesn't mean it still will be when you graduate. Also, "in" graduates tend to get hired by other (or even the same) "in" universities, since they are victims of their own hype, and we all know how in-breeding affects the gene pool.

If you work on just the topics that are most popular at the time, you might also become popular. This requires quick reflexes, since topics often lose popularity as soon as people read the first paper. If you write a paper on the topic before it becomes popular, no one will care, and they won't bother referencing you even when it does become popular. On the other hand, if you write a paper more than a week after it first becomes popular, at the very best your paper will become buried at the end of a long list of references. Furthermore, all that is relevant is that the paper be popular while you are being evaluated for a position, or at least while your letters of recommendation are being written, so if you are really clever you can work on anything you want until your last year in graduate school.

IV. Give a lot of seminars

If you speak everywhere you are applying at the same time you are being considered, your name has a better chance of being remembered. You might also include your photo in your application, for people who remember faces better than names.