In conclusion, this is a major new paper by the pioneers in the field, so you're going to have to read the rest of the paper whether you understand it or not, or at least convince other people that you did by memorizing all the catch phrases. If you're a faculty member, just get one of your students to read it for you. If you don't have any students, probably nobody talks to you anyway, so forget it. If you are a student, good luck.

*Work not supported. In fact, they told us specifically not to do it.

Nonabel was I ere I saw Lebanon --- Yang and Mills

The best things in life are interacting --- T Ching

All science other than string theory is garbage [1]. Since string field theory is becoming more and more a part of everyday life (so far, no disagreement has been found with experiment [2]), we here apply this formalism to the most important string, the super G [2]-string [3]. (See also [4].) Strings also provide the only known theories of quantum gravity which are too complicated to prove wrong, and therefore provide a convenient method of turning up our noses at all the ordinary particle theorists who haven't even learned general relativity yet. (Besides, if they haven't learned strings, they can only be phenomenologists anyway. This includes anybody who still calls strings "dual models".) The super G-string can also be used to derive models of GUTS [5] cosmetology (gastronomy), through the use of string solitons known as "comic strings" [6], due to their comic proportions. This string may even solve problems in the conceptual development of the statistical interpretation of quantum mecħanics, such as the famous Witten kitten paradox [7]. Strings were originally developed for use in QCD, whatever that was.

As usual [3,8], we begin by setting up some notational conventions (since nobody ever invites us to any other kind). We use Roman indices for vectors and Greek indices for spinors, except on Thursdays, when we do the opposite. This notation is unambiguous, since we use index-free notation anyway, which means you have to guess what all the indices are. Sometimes we also use symbol-free notation, so you also have to guess whether there is an equation there at all.

The paper is organized as follows: In the title we tell you what the paper is about. Since that's a lie, in the abstract we tell you what the paper is really about. That's also a lie, but we need more space to fully exaggerate our claims. Since most of the people who actually read these papers come from institutions so small that their theory group is abelian, they won't know the difference anyway. In the introduction we tell you what we did in the past, carefully referencing all the people who did unrelated work, while giving only backhanded references to anybody's papers that might be more interesting than ours (or at least ones that make even more exaggerated claims). We also tell you there about our (disregard for) conventions, and how the paper is organized, and we tell you how we tell you how the paper is organized, etc. In the following section, we test you to see if you're still awake. In section 3, we discuss the things we really don't care about, but which boring people keep asking us about anyway. In particular, we describe methods which avoid using the functionals needed in string field theory, for those of you who are functional illiterates. In the next section we explain BRST, which by now is so well understood that the only thing people don't understand is what the "T" stands for. In section 5 we discuss the real world, and prove that it exists. (We also sketch a proof that Green and Schwarz are not the same person.) Section 6 is a disclaimer, put in just to reference the work of people who are so important that we are embarassed to tell them how worthless their recent work is, and to avoid the whole problem by saying that we really don't understand their work yet, even though it's so trivial that even our chauffeur knows it's wrong. We also have a note added in proof, acknowledging the work of the referee. Finally, we have the acknowledgments, as if we didn't know that we don't really owe anybody anything (except maybe our bookies).

In this section we further develop the NEW (Not Ed Witten) string field theory [9], which is necessary to formulate the super G-string in a way which nobody but us can understand. (This allows us to publish many papers before anybody else, since they have to spend most of their time figuring out our notation.) Our NEW vertex is 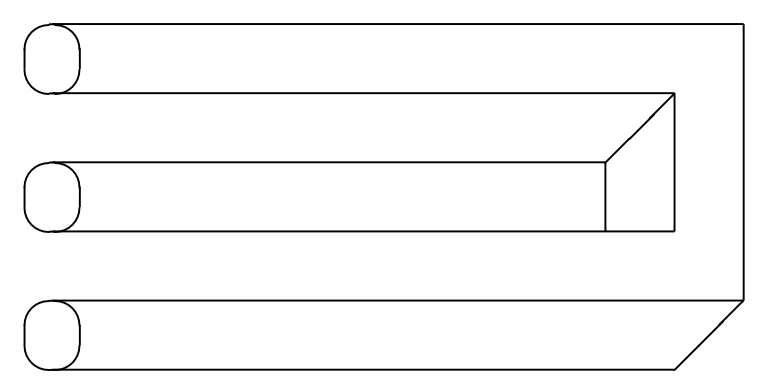 Notice that on the right-hand side of the figure there is only a free string propagator, while on the left-hand side are 3 strings, into which the propagator is continuously transformed, without introducing any curvature into the surface. Thus the interacting G-string follows directly from the free theory. (There have been claims that this vertex is just an optical illusion. However, the same has been said about the success of string theory in general.)

*Technically speaking, the term "string field" is self-contradictory, since, as we all know, strings don't grow in fields, they grow in vineyards.

Path-integral methods are very convenient for evaluating graphs derived from string field theory, since they allow us to use the transformations on the 2-dimensional bull-sheet resulting from general coordinate and local Weyl scale transformations, also known as "stretching it". We discovered this in [10]. (Everybody else discovered this much earlier [11], but we don't recognize them*.) In particular, these graphs can easily be evaluated by mapping to the upper-half plane:

*IN FACT, WE DON'T EVEN GO TO THE SAME CONFERENCES THEY GO TO. OOPS! I GUESS IT WASN'T SUCH A GOOD IDEA TO DO THE FOOTNOTE IN GOTHIC. WELL, SINCE THIS IS SO HARD TO READ, WE'LL PUT ALL OUR IMPORTANT RESULTS HERE, SO WE CAN REFERENCE THEM IN A LATER PAPER. THIS WAY, PEOPLE WON'T NOTICE THE RESULTS UNTIL WE POINT THEM OUT, SINCE THEY'RE TOO HARD TO READ, BECAUSE MOST OF THE GOTHS ARE ALREADY DEAD, OR AT LEAST NOT DOING PHYSICS. THE RESULTS ARE: WIURW NVWE WE VWIJR, IJWER WEIWI WEI J INWR IJNNWR. JNWER IWEJNR WERN IJWER WRG JWNR IJW: JN WRN IWJEROIQEOEJWO WEJNN JOR SCHRÖDINGER EQUATION WER ER ER G WTJNW JE ROJE WN IJWN!**
**If you can't read the previous footnote, don't worry. Even if you could read it, you probably couldn't understand it, and even if you could understand it, it wouldn't help you understand the rest of the paper, which you probably won't understand anyway. Sometimes we don't know why we even bother to write papers at all. Well, besides the money.***
***Actually, the money isn't all that great either. At least not for the paper itself. However, the residuals tend to make up for it. For example, if you would like to see any of our calculations, in notation which is not symbol-free, it will be very symbol-expensive. Be sure to send all your requests with a self-addressed envelope, and include a check for $10 per equation, plus $5 shipping and handling. No refunds. Address your letter to: Money B. Green, Haharishi Intergalactic Institute, Plantville, Iowa 12345.**** 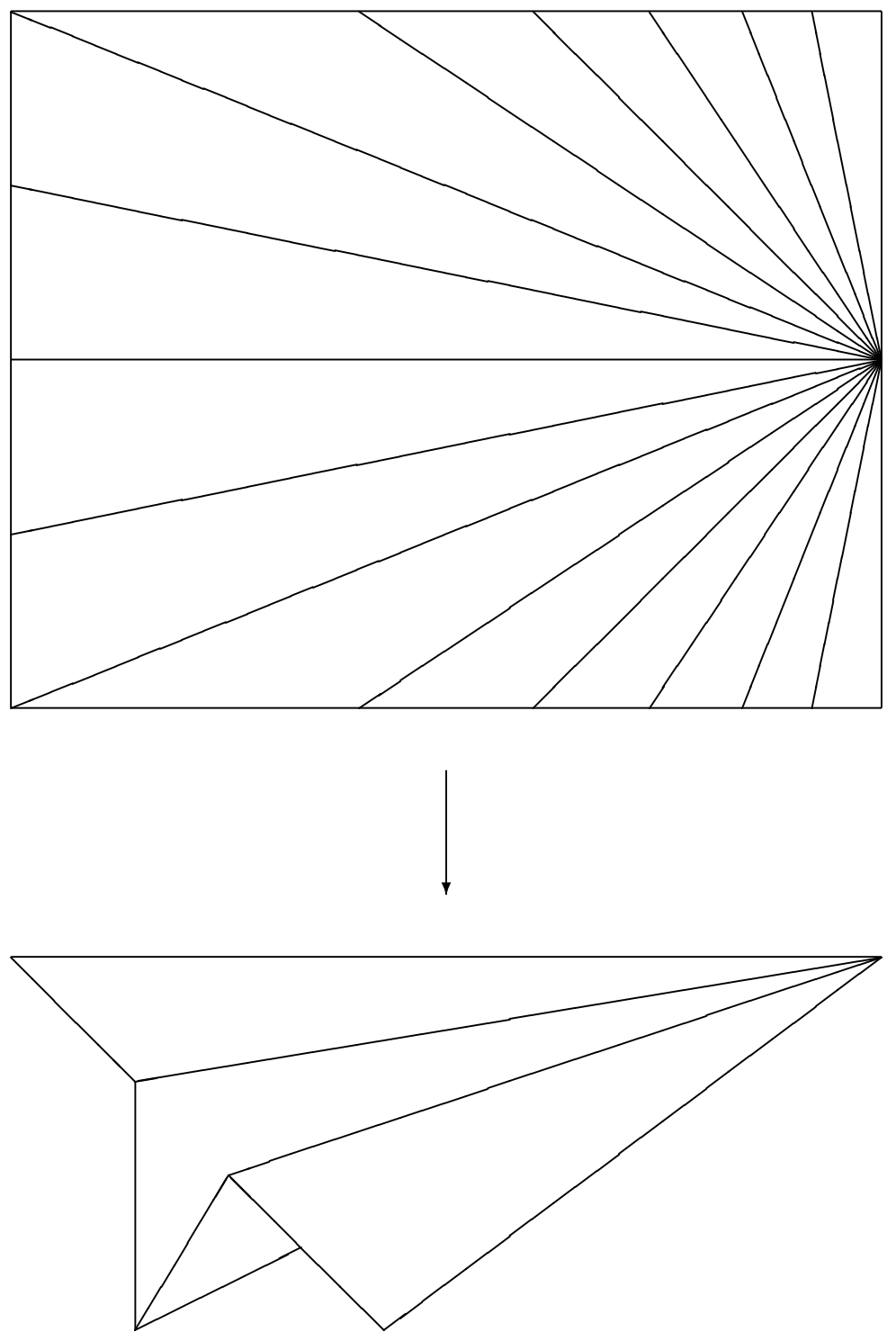 Fig. 2. Map to the upper-half plane

However, in most cases such methods turn out to be just a lot of "pointless geometry" [12]. Furthermore, this approach relies on doing first quantization, while, as everyone knows, it's always easier to do classical first, and second quantization. Nevertheless, these geometric methods have the double advantage of allowing the use of deep mathematical theorems that most physicists never even heard of, much less understand, so that we can simultaneously use old math that physicists were never aware of and old physics that mathematicians were never aware of, and thus excite everybody about something which was invented by somebody who's long since dead. In this way, the beauty of string theory is made very similar to that of classical music, as suggested by the term "G-string" (although we had a different type of beauty in mind when we invented the term).

Field theory formulations can be straightforwardly derived by the use of BRST [13] methods. For these purposes it is convenient to expand around flat space, so we first consider the G♭-string. These methods can be used to prove that the G-string has 12 sets of auxiliary fields [14l]. The geometry of the field theory described by Fig. 1 is necessarily commutative, since the geometry of a closed string is a ring, and only commutative rings are fields. The gauge transformations of the BRST formulation, known as "cordal" transformations [15], change the geometry of the string so as to produce ropes, or cords: 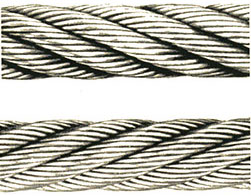 As for all high-energy physics, all string physics (not to be confused with the old-fashioned topic of particle physics) can be classified into two types: (1) esthetic and (2) anesthetic. The former type has the advantage that, when it is found that either nature disagrees with it or it is too complicated for anyone to know if they agree with it, it can still be published in a science fiction magazine or the science section of a formerly reputable newspaper. The latter type has the advantage that seminars on it give needed rest to the many overworked physicists who have spent many sleepless nights puzzling over theories of the former type. Since most of this paper has so far been devoted to type-1 physics, we now digress to type-2 as a respite. For those who don't wish to skip this section, we suggest you now place your index finger on the heading of the following section, to avoid the usual vicious circle of rereading the paragraph upon awakening which had been forgotten due to loss of memory in the pre-catatonic state.

As discussed previously [3], Kalvin-Klein compactification of the G-string to 4 dimensions can be obtained by giving appropiate σ-dependence to the vector index on the spacetime coordinate xμ(σ). One observable consequence of this phenomenon is the appearance of extremely miniscule particles [16] emitted by the compactified dimensions. Supersymmetry is preserved by the SU(3) holomoney (with flavors ¢, $, £), whose cohomology has a topology with good phenomenology. One useful method to study this behavior is the introduction of massless background fields, in terms of which an effective action is studied [17]. This allows us to ignore all the fields which make string theory different from ordinary supergravity in the first place, and which we really didn't want to have to learn about anyway.

All these results can be derived from a very general formalism which encompasses particle physics as well as string physics. The derivation of this formalism begins with the description of the string in the light-cone gauge [18]. This formalism is closely related to the Paris-is-sewerless formalism, in which the anticommuting coordinates become the Phantoms of the Operators.

After this work was completed, we became aware that similar results (including typographical errors) had been obtained in [19]. However, we have given much neater proofs of the theorems appearing there by ignoring all the important steps. Also, we have included some results which were omitted from the published version of [19] due to their being incorrect (see also [20]).

We would like to thank God it's Friday, for helpful discussions, and for making [21] available before publication. (He also informed us that He was independently aware of many of the results obtained here.) Also, we have a lot of friends who have done nothing worthwhile whatsoever on this topic, which makes us feel sorry for them. After all, they used to do pretty important stuff way back during the Middle Ages (i.e., in the era after the Classical Era of dual models and before the Modern Era of superstrings). So we thank them for many useful conversations, mostly on the weather and mutual funds [22]. Finally, we acknowledge several people for correcting sign errors and factors of 2 in an earlier version of this paper, and ask them to mind their own damn business from now on.